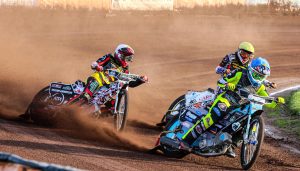 BERWICK moved four points clear at the top of the National Development League with a 53-36 win over champions Leicester.

Leon Flint and Greg Blair both scored 11 points for the Bullets, and Ben Rathbone marked his switch to reserve with 8+3.

Dan Thompson scored 12+1 for the Lion Cubs and Tom Spencer kept up his impressive start to the campaign with 9+2, but they were left with nothing to show for their evening.

Leicester boss Dave Howard said: “It’s always disappointing to come away empty-handed, but we are looking forward to tomorrow (Sunday) on our own track, where it’s a little bit of a specialist track, a bit like here.

“Obviously there were positives to be taken from tonight, especially Dan who led the way and Tom, it’s only his third meeting and he hasn’t had a single last place and was fully deserving of Heat 15.

“The young reserves struggled, but they can learn from that and move forward and take that into the rest of the season, starting tomorrow where we aim to turn the tables and get back to winning ways.”

The sides meet again at the Paul Chapman & Sons Arena today (Sunday) with Connor Coles standing in for unavailable Leicester No.1 Joe Lawlor.