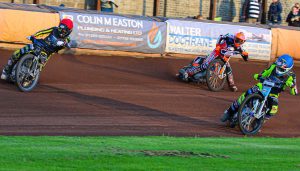 The Bullets duo were unbeaten against their former club with Flint scoring 15 – completing a meeting in which he took 12 rides in total – whilst Bickley collected 11+1, a total matched by Greg Blair.

The Colts were limited to three race winners, including 15-year-old Sam McGurk in Heat 8, whilst Benji Compton top-scored on 8+1.

Berwick boss Gary Flint said: “This is a good solid side we have in the NDL this year and they dominated Belle Vue tonight.

“I also want to thank everyone who worked so hard to get tonight’s first crowd double-header run with such efficiency from the riders, all club managements, track staff and the referee.

“For us to get 30 heats run, with falls and stoppages, to end right on our 9.30pm curfew was an immense effort!”

Colts co-boss Graham Goodwin said: “Having your first meeting away from home is always tough. It would have been nice to have had the home meeting on Friday, but we’re not in control of the weather.

“The result doesn’t reflect the amount of effort these guys were putting in. They really started to pick up in the later heats, but we just ran out of races to make a recovery.”