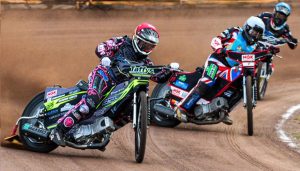 BERWICK made a winning start in the clash of National Development League newcomers by defeating Armadale 50-40 at Shielfield Park.

The Bullets’ heat-leaders won eight races between them with Kyle Bickley top-scoring with 12 points, skipper Leon Flint (11) dropped only one point from four rides, and speedway returnee Greg Blair picked up eight.

Devils reserve Gregor Millar crashed out of the behind closed doors meeting in Heat 2, suffering an upper leg injury, but colleague George Rothery was one of the stars of the night with 11+2 from seven rides. Nathan Greaves added 10 in the No.1 position.

Berwick boss Gary Flint said: “Great to see the guys back on the track in official league racing again after something like 19 months, and our side looked so slick and ready for victory, almost like they’d never had the break in the first place.

“Leon was right back to form, as was Kyle, while Mason Watson has shown what he can do, winning Heat 2 well.

“This was a great way to start to start the season, and it sets us up nicely for our trip to Armadale on Friday night. The lads are confident of taking a decent result up there too.”

Rothery said: “I’m pretty happy with how I rode and the points I scored. My gating set-up was wrong to start but I got it sorted as the night went on, and it’s always nice to finish the night with a win.

“It was a solid performance by the team, and it’s good to get the first match in. We can be happy with that, and we’ll try and overturn them at home.”