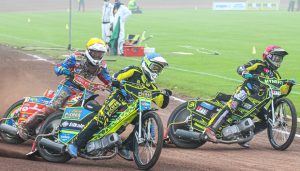 BERWICK collected their first Championship points of the season with a 54-36 win over Scunthorpe at Shielfield Park.

Dany Gappmaier charged back to form with 15+1 from six rides for the Bandits, with Nikolaj Busk Jakobsen adding 12 and in-form reserve Leon Flint kept up his strong start to the season with 11+3.

Former Berwick man Thomas Jorgensen won his first four rides for the Scorpions and finished on 14, with recent signing Josh MacDonald getting reward for his earlier efforts by winning the penultimate race.

Berwick boss Gary Flint said: “This was a great team performance, from top to bottom, no grumbles from me tonight!

“Jye (Etheridge) was still sore after his crash last week, but still put in the effort while Dany excelled and looked like he was going to be unbeaten till he met Thomas Jorgensen – but we all know how well he used to go round this place.”

MacDonald said: “I was kicking myself over the fall in the other race (Heat 4), because I should have won that as well.

“It’s the first time I’ve been here, but I know how to attack the track for next time. You’re only as good as your last race and I had a pretty good last race! [beating Gappmaier].”