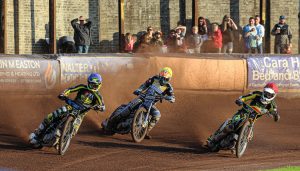 BERWICK raced to their biggest win of the season as they defeated Plymouth 57-33 at Shielfield Park.

Jye Etheridge made a successful return from injury for the Bandits with a four-ride paid maximum (11+1) whilst Leon Flint scored 10 from five rides racing in the main body of the team.

The home side lost Kasper Andersen after a crash in the initial staging of Heat 2 as he withdrew after the re-run of that race, but fellow reserve Kyle Bickley covered well with 11+3 from seven rides.

Bjarne Pedersen (11+2) and Jason Crump (10) dominated the scoring for the Gladiators.

Berwick boss Gary Flint said: “What a meeting that was! It had some superb passing and the Bandits, at full strength, did what we know they can.

“They worked as a team unit to dominate the Gladiators and were not intimidated by the presence of Jason and Bjarne, in fact they all tried that bit harder to beat them, and some of them did!

“All credit to all 14 riders out there tonight as they all contributed to a great night out, and of course we wish Kasper a quick recovery from the nasty bang to the groin he suffered in Heat 2. I’m sure he’ll bounce back soon.”