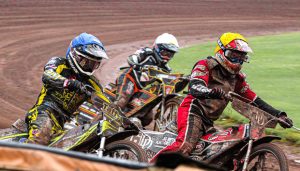 BERWICK reserve Leon Flint kept up his sensational start to the season with a match-winning display in the Bandits’ 51-39 win over Newcastle.

Flint racked up 16+1 from six rides at reserve, including a Heat 15 victory over the Diamonds’ previously unbeaten Matthew Wethers.

Dany Gappmaier (12+2) was also in double-figures for the hosts, whilst former Berwick man Wethers (12+1) was backed up by James Wright with 12 from seven rides at reserve.

Bandits boss Gary Flint said: “Again it was a team effort, and with Dany looking so fast tonight along with Leon picking up paid 17 at reserve we have a solid side getting good results, and we can continue to do so.”

Newcastle manager Nigel Hinchliffe said: “I think it’s fair to say we did better tonight than most people had expected, but that said with Ben (Barker) having awful luck, including a painful chain snapping, we know he could have done better than six.

“Max Clegg is still struggling for his true form, which we know he has, so again points could have been added and maybe pushed the Bandits even closer.”