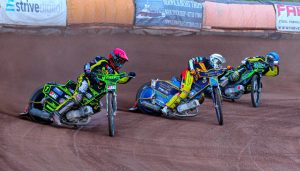 BERWICK handed Leicester a losing start to their Championship defence – with the Lions looking to turn the tables in today’s (Sunday) return fixture.

The Bandits triumphed 47-43 at Shielfield Park despite a 15-point maximum from Lions star Ryan Douglas and 15+2 from six rides for Nick Morris as the visitors’ top two dominated the latter stages to take a league point.

But the solid home side grabbed their second win of the campaign with Dany Gappmaier top-scoring on 13+2 and reserve Leon Flint adding 10+1.

Berwick boss Gary Flint said: “This was a very tough match, and it wasn’t until we were mathematically out of reach at the end of Heat 14 could we be sure as Leicester were in this for the win and didn’t make anything easy for us.

“Credit to them for making it a great match, but win we did and again it was a full team effort showing what a solid unit we are.”

Lions manager Stewart Dickson said: “I think given the circumstances a point is a good result and there were positives to be taken from the meeting, especially Ryan and Nick.

“Before the meeting I felt Berwick were there for the taking, but at no point tonight did I feel like we would win as some of the guys were below their usual high standards.”