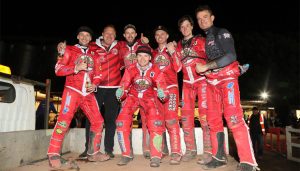 GLASGOW closed in on Redcar in the race for a top two Championship finish with a 49-41 win at Berwick on Saturday.

The Tigers are a point behind the Bears with two matches apiece remaining, with both of Glasgow’s being at Ashfield whilst Redcar have a tough away trip to Poole.

Captain Ricky Wells won four races and finished on 13 points whilst Craig Cook (11+1) until a last-race disqualification after a clash with Dany Gappmaier.

Leon Flint (11+2) and Gappmaier (11+1) top-scored for the Bandits, who raced with rider-replacement after planned guest Jason Crump had to pull out due to illness.

“Some of the boys who were fantastic last night (Friday) didn’t do so well tonight and vice-versa. But the team is looking good and I keep saying that if they can all fire together, we’ll be in a great position.

“We expect that from Ricky. We’ve been very patient with him and he’s started to produce a few good results – but he’s got to keep it going because he’s key for what we want to achieve.”