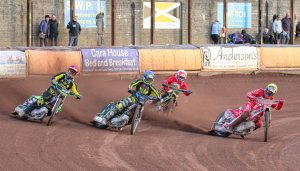 GLASGOW made progress in the KO Cup with a 48-42 win at Berwick as the home side were reduced to five riders.

Bandits duo Jye Etheridge and Dany Gappmaier crashed with the Tigers’ Craig Cook on the first bend of Heat 1 with Etheridge hospitalised and Gappmaier taking only the re-run before withdrawing.

Cook went on to secure a 15-point maximum with Ricky Wells adding 12+1 as the visitors won 99-81 on aggregate. Aaron Summers (11+1) and Nikolaj Busk Jakobsen (11) led the efforts for the depleted hosts.

Berwick boss Gary Flint said: “So the Cup’s gone for 2021, and there is a point or two we’re far from happy with, but outweighing all of that is that Dany withdrew after hie re-run Heat 1 after the horrible crash that left Jye very injured and now in a hospital bed, and we can only wish him the very best for his recovery.

“We will update the fans on exactly what his injuries are as soon as we have everything confirmed.”