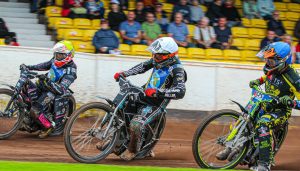 EDINBURGH raced to an astonishing 58-32 away win at Berwick to increase the pressure at the top of the Championship table.

The Monarchs provided all but two heat winners in a display of total dominance at Shielfield Park, with Sam Masters leading the way with a 14+1 paid maximum.

Richie Worrall added 11+2 and all seven visiting riders won at least one race, whilst Dany Gappmaier scored 11 for the Bandits who suffered their third home defeat of the league campaign and the heaviest by some distance.

Monarchs second-string Nathan Greaves (6) said: “I don’t think anyone expected that including ourselves, to win by that much around their own track.

“I’m so happy, so glad we won and it’s on to the next one now. This year I think I’ve gone up a level and tonight was fantastic.

“It was a great performance and one we can build on, and I think we can still get better.”

Berwick boss Gary Flint said: “It was one to forget but learn from too as we know we’re a far better side than the one who lost pretty badly tonight.

“We know what we can do, and we know from Friday night what a class act our new Bandit, Kasper Andersen is, so we move forward, and I can guarantee upwards as well.

“To be fair Edinburgh also were on top form, and I honestly don’t think we were as bad as it looked, but if you have an off-night against a team firing on all cylinders with turbo-injection you’ll suffer.”