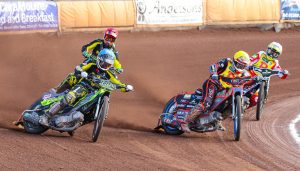 The Brummies won 51-39 at Berwick to earn their first professional level away success since September 2013 – despite going 2-10 down in the first two races.

Both sides used tactical substitutes in a see-saw encounter in which Berwick were six points up at the halfway stage only for the visitors to respond with three successive 5-1s.

New skipper Chris Harris led the way with 14+2 from six rides, whilst the Bandits were hampered by the loss of Jye Etheridge in a first-ride crash. Aaron Summers top-scored with 10+1.

Birmingham boss Laurence Rogers said: “That was just what the doctor ordered. It’s a dream way to start off the season and what a fabulous performance it was from the boys.

“Yes ok, Berwick were unlucky to have Jye Etheridge withdrawn following his opening ride when already using rider replacement, but take nothing away from our lads.

“There were some really great performances out there and even with the two boys missing tonight, it’s a really encouraging start to the year in more ways than one.”