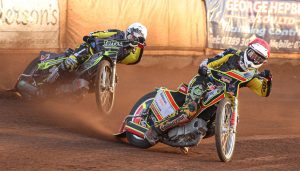 Kasper Andersen won four of his five rides on his way to 12 points whilst Aaron Summers collected 11 – but Leon Flint, for the Bullets, was the highest scorer on the night with 14 from six.

Co-promoter Scott Courtney said: “It was a good night out, entertaining and different.

“I think the exhibition has proven this format with six heats featuring nominated riders, decided by the team managers, works well and adds another dimension to the tactics of the match. We’re all happy with this experiment.”