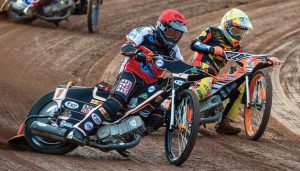 BELLE Vue notched another home win in the NDL by defeating Leicester 47-42 with the Lion Cubs doing enough for a league point.

Jack Smith again impressed as guest No.1 for the Colts with 13 points whilst youngster Sam McGurk marked his return from injury with an 11-point score at reserve.

McGurk combined with Paul Bowen for a 5-1 in Heat 14 to clinch the match, but Lion Cubs No.1 Dan Thompson (14) beat Smith in Heat 15 with Joe Lawlor third to give the visitors some reward.

Said McGurk: “We really needed this result, and it has really boosted morale amongst the boys. We knew Leicester were a strong side, but we were stronger on the night.

“We knew they would put us to the test and they didn’t make it easy for us, they were very quick and we had to make sure to keep last places to a minimum.

“All the lads played their part and every point we scored was crucial, and we knew we needed all three league points if we want to have a shot at the trophy this year.

Cubs boss Dave Howard said: “With having more away meetings to come than home, if we can pick up points at each one then it gives us a chance, so I’m really pleased to get a point here.

“We really fought at the end when we went seven down to get that point, and it was a great effort from the team.”