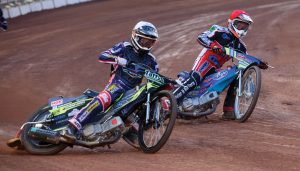 BELLE VUE turned the tables on Berwick with a 51-38 NDL win in Manchester on Friday.

Visiting No.1 Leon Flint scored a 15-point maximum on his old home track, but the Colts gave the better all-round performance as they avenged the 38-52 result in the Bullets’ favour last weekend.

Brothers Harry and Sam McGurk starred at reserve for the hosts, Harry scoring 13+1 and Sam 10+1, whilst Benji Compton also collected 10+1.

Sam McGurk said: “All the boys rode really well. Taking the lead early on gave us a huge boost in confidence and we carried that through the rest of the night, and the result reflects that.

“We said we wanted to return the favour and that’s what we did. It felt good to win our first home meeting. It was an amazing night against a very tough team, and they made us work for it.”