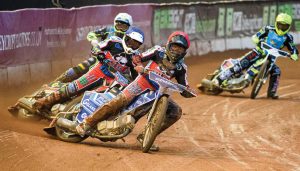 BELLE Vue moved up to second place in the National Development League with a 51-39 home win over Armadale.

Recent signing Jack Smith led the way for the Colts, beaten only by Devils guest Kyle Bickley who scored 12, and received good support from former Belle Vue rider Danny Phillips on 10+1 – but the home side were the more solid-scoring down the order.

Colts star Harry McGurk (8+1) said: “It was a good win for the boys and we’re in a great position at this point in the season to perhaps even challenge for the title.

“Some clubs below us have matches in hand, but we’ve still got a few meetings to get more points and hopefully we can bring that trophy back to Manchester.

“Armadale were challenging us all night. We didn’t expect anything less though, especially with so many ex-Belle Vue riders in their team.

“Danny and Kyle really put up a fight, but we managed to get the better of them and we’re just delighted to have repaid Armadale for the narrow defeat we had at their place.”