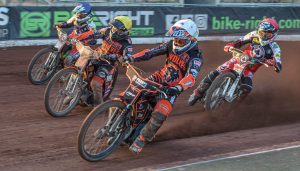 WOLVERHAMPTON moved up to second place in the Premiership table with an impressive 50-40 win at Belle Vue.

The Aces led by four points with five heats remaining, but Wolves responded with three successive 5-1s to inflict the hosts’ first home defeat of the season.

The visitors provided ten heat winners with Sam Masters (13+1) dropping his only point in Heat 15, and he combined for two 5-1s with Luke Becker (9+2).

Charles Wright (10+1) and reserve Jye Etheridge (10) top-scored for the Aces, who were left to reflect on a major wake-up call.

Wolves boss Peter Adams said: “I thought we were exceptional. We were missing Leon (Flint) of course, but the other six were magnificent to a man.

Aces star Dan Bewley said: “It was a tough night for everyone. We got off to a decent start and we kept things very close to begin with, but we just got beaten by the better team.

“I personally didn’t feel like I had as much speed as usual. I had a few practice laps after the meeting so hopefully I’ll have that sorted for Monday.”