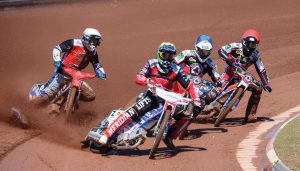 PETERBOROUGH headed into their East of England Arena return fixture against Belle Vue on Monday evening – off the back of a hugely creditable lunchtime result.

The Crendon Panthers achieved a 45-45 draw in Manchester to open their Premiership account with two league points on one of the toughest away circuits.

A hard-working overall team performance meant Panthers were only briefly behind in the early stages, and they subsequently forced the host to fights back from eight points down.

Red-hot Dan Bewley completed a 15-point maximum in the last race in a 5-1 alongside Brady Kurtz to salvage a draw for the Aces, despite a great effort from Bjarne Pedersen who led into the third bend.

Pedersen could be delighted with his Panthers debut, and his combination with Hans Andersen proved to be most profitable as they recorded two 5-1s together.

Andersen charged from fourth to second in the opening race as both home riders lifted on the third bend, and that set Panthers off to a good start.

They then fell behind to two Aces 5-1s but hit back with a 4-2 in Heat 4 as Chris Harris charged clear and youngster Jordan Palin held second for a time before Charles Wright came through.

But Panthers really stunned the hosts in Heats 6-8, first when an impressive Ulrich Ostergaard teamed up with Harris for a 5-1, and then Scott Nicholls and Michael Palm Toft combined to squeeze out Wright in Heat 7.

All of a sudden Panthers were six-up and they received a stroke of fortune in Heat 8 when leader Richie Worrall punctured to hand Ostergaard another win and Panthers a 28-20 advantage.

Belle Vue charged back in a topsy-turvy meeting with back-to-back 5-1s as Palin crashed heavily in Heat 9, his bike clearing the fence but the 17-year-old thankfully walked away.

But at 30-30 Panthers came again with the Pedersen/Andersen combination overcoming Wright for a 5-1 in Heat 11 thanks to a clever move from Andersen, and Ostergaard and Palm Toft were happy to pack in behind the flying Bewley in Heat 12.

The pressure was on when Kurtz and Wright, who had both struggled early on, edged out Pedersen in Heat 13 to level the scores again – but a brilliant Panthers 5-1 in Heat 14 saw Ostergaard storm from gate three whilst skipper Nicholls clamped down Steve Worrall to send them into the last race four points up.

Pedersen was so nearly the hero in the decider as he pulled ahead of the home riders into turn three, only for Kurtz and Bewley to shoot past the Dane on either side to level the match once again – but it was still a terrific result for the Panthers.

Ostergaard said: “This is always a hard place to come to, and I know it’s the start of the season, but these guys have a lot of experience around this track anyway, and I’ve not been here in five years.

“But it’s a proper race-track, it’s fair for everyone and I think we produced some brilliant speedway out there.

“Now we’re looking forward to tonight, it’s brilliant weather so hopefully there will be a good crowd, and I think the track will be good too. It’s two competitive teams, so hopefully we can put on the same show but hopefully win by a few points!”