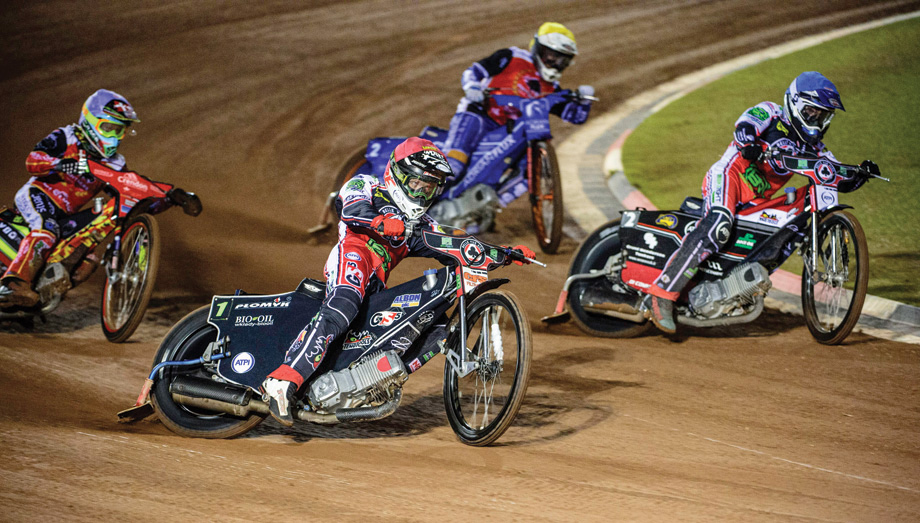 BELLE Vue edged a narrow 46-44 advantage over Peterborough from the first leg of a thrilling Premiership Grand Final in Manchester.

The Aces were ten points up with four races remaining, but back-to-back 5-1s from the Panthers in Heats 12 and 13 brought them right back into contention ahead of Thursday’s return.

Dan Bewley (15) and skipper Steve Worrall (13) both won four races for the home side, whilst the visitors again had to dig deep after Hans Andersen was ruled out following a frightening crash in Heat 3.

But captain Scott Nicholls led by example with 14+1 and Chris Harris added 10+1 as the Panthers set things up superbly for the second leg.

Belle Vue youngster Tom Brennan said: “We are a bit frustrated at having lost a more significant lead, but a win on the night is still a win and a lead is still a lead that we take to Peterborough.

“Momentum is definitely on our side and our record at the East of England Arena is pretty good so we’re feeling pretty positive about our chances.

“Some of the boys struggled a bit and with Brady [Kurtz] still out the pressure was on the rest of us to step things up, but I think we did that.”

Peterborough boss Rob Lyon said: “I’m pretty shell-shocked really, we seem to be having those meetings on a regular basis at the moment!

“But again, what a performance after Hans was ruled out, and how well we just pulled together and put a performance back to Belle Vue and really took it to them.

“It gives us a good chance now going into the home leg, without a doubt. Now we need to sort out our position with guests and whatever else, and go from there with a title to win on Thursday.”