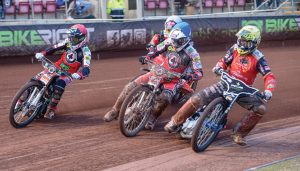 PETERBOROUGH took a giant step towards the Premiership play-offs with a sensational 47-43 win at Belle Vue on Monday.

Michael Palm Toft and Bjarne Pedersen were the last heat heroes as they got the Panthers over the finishing line in Manchester after a spectacular battle with Charles Wright, whilst Dan Bewley completed a 17-point haul for the Aces up-front.

Bewley dropped his only point to a remarkable victory from youngster Jordan Palin in Heat 13, but the Panthers proved the more solid side all-round with Palm Toft leading their scores on 12+1.

Peterborough boss Rob Lyon said: “It was absolutely brilliant. We knew it would be tough coming here, it always is, but the boys responded superbly and it was a terrific team effort.

“Obviously we were looking for a 3-3 in Heat 14 to clinch it, which didn’t quite work out, so we took our time in choosing gates for Heat 15. Both Bjarne and Tofty were quick tonight, and they did the business for us.

“Jordan was terrific, he’s had some tough meetings with us recently, but we know what he’s capable of and Heat 13 was probably the best ride of his career I would say.”

Aces captain Steve Worrall said: “I really do feel for Charles. He never once backed down and he came so close to getting that second spot in Heat 15, and he was understandably devastated to miss out.

“The same can be said for all of the boys. Everyone was putting in the effort tonight and we are all disappointed not to have anything to show for that effort.

“But full credit to Peterborough. They came here tonight in good form and rode exceptionally well so we can’t take anything away from them.”