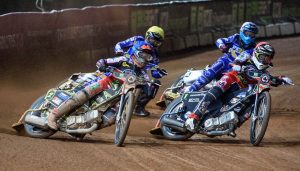 DAN Bewley scored a 15-point maximum as Belle Vue warmed up for the Premiership play-offs with a 49-41 win over King’s Lynn.

The Aces had to work hard to shake off a determined Stars challenge with Bewley twice passing the visitors’ guest Craig Cook in the closing stages to ensure their opponents left with nothing.

Skipper Steve Worrall added 10+1 for the home side whilst Rising Star reserve Connor Mountain put in a sensational display for the Stars with 13+2 including three race wins.

Belle Vue youngster Tom Brennan said: “It’s always good to get a home win but this sends out a massive statement ahead of the play-offs that we’re not there to make up the numbers.

“We are becoming dominant at home, you can see everyone working well together, adapting and hitting their marks and that will be key for us in the semi-finals.

“Momentum is definitely on our side and all of the boys are ready for whatever challenge is to come in the next few weeks.”

King’s Lynn boss Alex Brady said: “It’s a bit like a broken record really with battling performances and trying really hard, but everyone gave it their all and Connor was absolutely outstanding.

“He’s been unlucky to be a victim of the tactical substitute ride in most meetings we’ve had, but tonight he deserved his seven rides and I’m really pleased for him.

“Overall I’m proud of the boys, and we just couldn’t quite get over the line to get that point.”