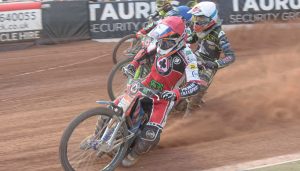 BELLE Vue maintained their lead at the top of the Premiership with a powerful display to defeat Ipswich 55-35.

The Aces’ new middle-order combination of Charles Wright (13+1) and Steve Worrall (11+3) both dropped only one point from their five rides as they saw off the injury-hit Witches.

Jake Allen was the man to defeat Wright and Worrall in Heat 3 and he went on to score 11 points, with reserve Drew Kemp impressing on 9+1.

Wright said: “Tonight felt like a fresh start for me. I’ve been struggling with such a lack of power in my engines, but we’ve managed to work through that, and I felt really fast.

“This was a big result for us, probably the biggest win we’ve had all year so far, so we just need to keep this going, but I’m confident that’s something we will be able to do.

“Ipswich kept the pressure on us from start to finish but again, the spirit within this team is so strong and we were confident we could finish the job; it’s just great to be part of a team like this.”

Ipswich co-promoter Chris Louis said: “We were able to fill the slots but were not providing the race winners. I can’t knock anyone, they all gave it 100%.

“I felt in many ways we actually got better in the second half, but it was never going to be enough.

“You can’t take anything away from Belle Vue, they are high in confidence and are winning and are good at home.”