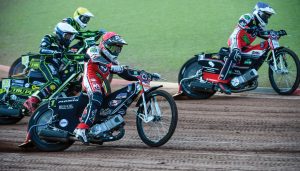 DAN Bewley struck a 15-point maximum in his first meeting at No.1 as Belle Vue consolidated their place in the play-off zone with a 55-35 win over Ipswich.

The scores were level after eight races, but the Witches were then blown away by four Aces 5-1s in the next five races to put the match well beyond the visitors, who lost their place in the top four.

Bewley was backed up by Brady Kurtz on 11+2, whilst Danny King racked up 14+1 from seven rides for the Witches.

Said Bewley: “I’m delighted with how tonight went. I think it was my first full maximum of the season, but I’m glad we’re getting back to racing at home.

“We were mega disappointed to lose against Wolves last week and this result was just what we needed, especially at this point in the season.

“We’ve just got to keep this going now. We’ve got one foot in the play-offs and a few more results like this one will absolutely cement that for us.”

Ipswich boss Ritchie Hawkins said: “It was classic Belle Vue really, the boys kept tweaking their setups, but it didn’t seem to be helping them.

“After starting the first half of the meeting so well, to go down by that many is disappointing.

“Sheffield winning at King’s Lynn has left us in a really, really bad position in the race for the play-offs. Fair play to them but we need to come out fighting on Thursday and get a win.”