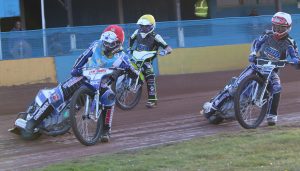 ARMADALE reserve George Rothery continued his sensational start to NDL racing with a 15-point haul in the Devils’ 48-42 home win over Berwick.

Rothery, in only his second match at this level, won five of his six rides including one from the back over Bullets’ No.1 Leon Flint.

Nathan Greaves (13) and Tom Woolley (11+1) were both in double figures for the home side, whilst Flint scored 13 for the visitors who took a league point from the meeting to make it four in total from the two fixtures against the Devils.

Rothery said: “The feeling in the team last Saturday was good and I was pleased with our score, because I think Berwick are going to be the hardest team in the league to beat.

“Tonight the track felt a lot better than it had in practice, but I had also made a few changes which worked. I’m hoping to win a lot more races!”