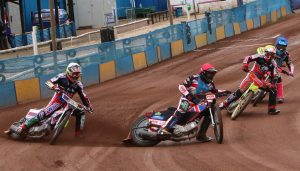 Both teams held the lead at some stage but the Devils ended on top with the Colts claiming a league point despite the first-ride withdrawal of Ben Woodhull. Reserve Harry McGurk impressed with 13+3 for the visitors.

Armadale boss Alan Budzynski said: “I was delighted to get the win against a good team such as Belle Vue.

“I was pleased that our second strings are starting to put together some good rides, I have said previously that all it needed was patience. The whole team worked together well in the pits.”

Colts co-boss Graham Goodwin said: “All of the boys put in a solid effort. We certainly can’t fault their performance and we are just so glad to have taken a point from this meeting.

“We don’t believe Ben has broken anything, but he was in a lot of discomfort, and we think it is soft tissue damage to his arm. But we have a break from racing now so hopefully that will help.

“A few things didn’t go our way that, if they did, I’m confident we could have come away with all three, maybe even four, points but we are still delighted with this result.”