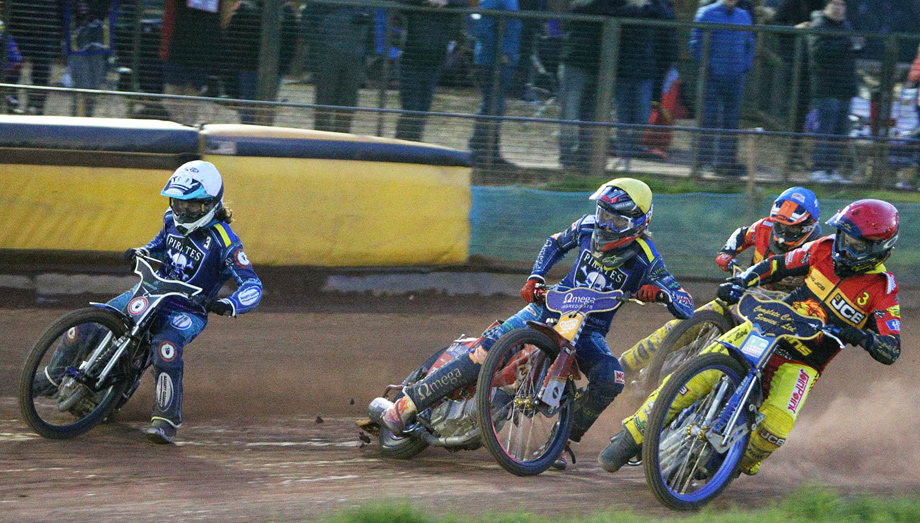 In easily the best match of the season at the venue so far, the Watling JCB Lions triumphed with a last-heat 5-1 from skipper Kyle Howarth and Richie Worrall – but only after a dramatic clash between Worrall and Danny King which saw the Pirates man disqualified.

That was the second incident of the night between the two riders, as they had also tussled in Heat 4 when King came down on the exit of turn two with Worrall being deemed the cause of the crash.

Leicester held the lead from Heat 2 when reserves Anders Rowe and Joe Thompson combined for a 5-1 over Drew Kemp, but the British Under-19 Champion was to have far more influence later in the meeting as he kept the Pirates in the contest with a full quota of seven rides.

There was a run of six successive shared races in mid-meeting, including some thrilling action between the heat-leaders, with Worrall superbly rounding twin brother Steve to win Heat 11 after earlier going inside Kemp.

Howarth, meanwhile, was unbeaten from his first three rides after overcoming Richard Lawson in a ding-dong scrap in Heat 3.

The Lions’ four-point lead was trimmed to two when Lawson held off Howarth in Heat 12 with Kemp supplying third place, and two more 3-3s took the match into a last-heat decider as Kemp replaced Ben Cook and duly won Heat 14 for the Pirates.

Howarth rode a stormer on the first lap of Heat 15 to get the better of Lawson and King, and he had full control of the race until Worrall, who had been forced to back off the gas on turn two, regained ground on King and rounded him into turn three, with the two riders then tangling and coming to grief at high speed.

As both thankfully walked away, all eyes turned to referee Craig Ackroyd, who disqualified King which effectively resolved the match in the Lions’ favour – and Howarth and Worrall sent the fans home even happier with a well-worked first bend to defeat Lawson in the re-run.

Manager Stewart Dickson said: “We knew it was going to be tough. Poole are a very good side, but I think after the disappointment of Friday (at Scunthorpe), any questions that were directed at my team over fight or anything were answered.

“We showed we’re up for a scrap, and that was a real battle tonight. I thought we were on the wrong end of a decision in Heat 4, and I was just pleased to see both boys walk away in Heat 15.

“The important thing was to get the victory. We won by six points and I don’t think that flattered us in any way – we would have got a 4-2 in Heat 4 when Richie was disqualified, and Connor Mountain was comfortably third in Heat 6 when his cut-out came off.

“All in all, the main thing was to come back and win after losing last night. We showed there’s character in the team, and there was a really good atmosphere in the pits. We were the better team, and we deserved the win.”