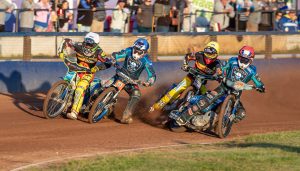 POOLE completed the double over Leicester with an impressive 52-38 Championship win at Wimborne Road.

The Pirates’ heat-leaders were in dominant form with skipper Danny King (14) dropping his only point to Ryan Douglas in his first ride – whilst Steve Worrall and Rory Schlein both won three races on their way to scores of 11 and 10 respectively.

King said: “I have said it before but make no apology for repeating it, but it is so good to see how the whole team is bouncing off each other. Everything is flowing just fine right now.

“That’s not to say we were really struggling before, but things are a lot better all-round now and we are all looking forward to the Northern tour next week.

“It is great to be having more regular racing and it is through having race meetings that keeps you sharp.”

Lions boss Stewart Dickson said: “It was very much the same story as when we lost on Saturday night, and they were jumping out of the starts and beating us.

“I thought we were getting bullied in the first corner as well, and we had a wee chat during the second track grade where I was fairly blunt!

“Whether they got off to a very good start or we got off to a really bad one I’m not sure, but we did get a response, we showed some fight so the riders deserve credit for that – but only having three heat wins shouldn’t be happening with the team we’ve got.”