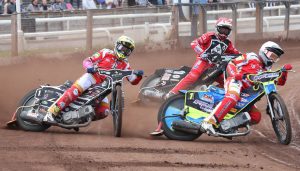 TROY Batchelor scored a paid maximum as he and Scott Nicholls rescued a 45-45 draw for Kent at Newcastle.

The Kings made it two drawn meetings over what became a two-match northern tour, with Batchelor (14+1) and Nicholls (15+2) twice combining for 5-1s in Heats 13 and 15 to level the scores.

An impressive Max Clegg scored 12 for the Diamonds, with Connor Mountain and James Wright both winning their final rides.

Newcastle boss Steve Pate said: “Kent with Scotty Nicholls and Troy Batchelor are a team of quality and resilience, and that’s how they bounced back to almost take the win.

“But Max Cleg saved us from defeat with his huge increase in form later on, especially the vital Heat 14 which made a massive difference.”