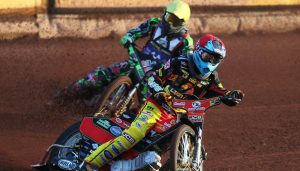 LEICESTER edged out Eastbourne 47-43 in a last-heat decider as both teams kicked off their National Development League campaign.

The reigning champions triumphed with a 3-3 from Dan and Joe Thompson in Heat 15 although they were unable to beat inspired Seagulls No.1 Jake Knight who completed a 15-point maximum to help his side to a league point.

The visitors lost Henry Atkins who dislocated his shoulder after two race wins, whilst Lion Cubs’ guest reserve James Chattin suffered a collarbone injury in a crash after Heat 10.

Leicester boss Dave Howard said: “It was a very unpredictable meeting all the way through with plenty of incidents for both teams, and at the end of the day it was really good to get the three points.

“They were unlucky with Henry and his shoulder, but for us James was having a cracking race and for him to break his collarbone at the end was so unfortunate after the effort he’d put in.”

Eastbourne manager Will Pottinger said: “It was a major handicap to lose a rider who had already won a couple of races. That was a major loss and one you cannot replace with due respect to the reserves.

“We battled on and managed to get a few heat advantages later in the meeting to bring the score closer, and Jake did the business by winning the last heat. He rode fantastically well all night.”