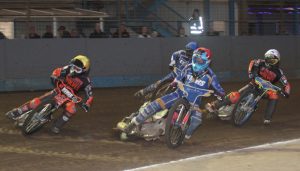 PREMIERSHIP leaders Wolverhampton were held to a 45-45 draw by battling King’s Lynn at the Adrian Flux Arena.

Wolves are now six points clear at the top but have raced two more matches than second placed Peterborough – whilst the result also confirmed Belle Vue’s place in the play-offs.

Leon Flint and Sam Masters won the last two races for the visitors, which both ended 3-3 after home duo Thomas Jorgensen (12) and Richard Lawson (10+2) had levelled the match with a 5-1 in Heat 13.

Ryan Douglas racked up 13 points at reserve for Wolves, but Nick Morris suffered concussion in a Heat 10 crash.

Douglas said: “It is always a worry when a meeting can turn at any moment and when we lost Nick to injury it was a bit of a blow, he is pretty good around King’s Lynn.

“Me and Leon had to step up and we managed to get some extra points. A draw is not the end of the world, but we would have liked to win.”

Jorgensen said: “We are gutted to draw, for sure, but they have a strong side. We felt we could have put it away, but it was always going to be difficult.”

“We changed a few things early on to try to get it back to how we normally have it because I have been struggling in the UK lately.

“We are trying to sort things out but I think we are getting dialled back in like we were so we should be alright for the next meeting.”