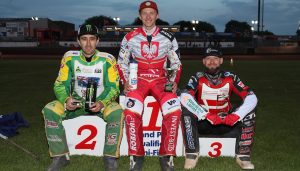 THREE Great Britain riders have qualified for the Grand Prix Challenge after a successful day of World Championship action.

Dan Bewley made it through the Glasgow qualifier, holding his nerve to win a run-off for the final place with Rasmus Jensen after both riders scored 11 points.

Tobiasz Musielak with a 15-point maximum, Chris Holder and Nicolai Klindt were the other three riders to progress from Ashfield.

Meanwhile Robert Lambert was successful in Croatia, finishing third in a meeting where only three places were available – winning a three-man run-off to clinch his place.

And Adam Ellis finished third in Italy and was another rider successful in a run-off, this time to clinch a place on the podium.

All three progress to the GP Challenge in Slovenia in August, whilst fellow GB racers Charles Wright and Lewis Kerr scored seven and six points respectively at Glasgow.

And there was a sensational appearance at reserve by Tom Brennan, who took four rides after Bradley Wilson-Dean and Tero Aarnio were withdrawn from the meeting, with the Eastbourne and Belle Vue youngster accumulating a remarkable nine points including a race win over Holder.