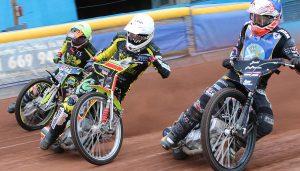 EDINBURGH remain third in the Championship after seeing off a strong challenge from Berwick with a 50-40 win at Armadale, with the sides meeting again tonight (Saturday).

The Monarchs only led by four points with two heats remaining, but a best-yet performance from Kye Thomson, with 12 from six rides, helped them to victory.

Both home stars Sam Masters (12) and Richie Worrall suffered handicap penalties for starting/time infringements, but Josh Pickering impressed again with 13+1 as the hosts maintained their dominance of heat wins.

Kasper Andersen made an excellent debut for the Bandits with 12+1, and both Jye Etheridge and Aaron Summers were paid for double figures.

Pickering said: “We did what we have to do. I wouldn’t say Berwick have got two or three big riders who win lots of heats but they have a team who all do well, they are a strong team and they normally run us close here.

“So it’s good to get the three points and send them home with nothing. Things are going well, we are just having fun!”

Berwick boss Gary Flint said: “It’s great to come to what was our bogey track and put in this sort of competitive performance from all the guys, and for Kasper Andersen to make his Bandits’ debut as top scorer is a brilliant thing to see.

“We knew he was going to significantly strengthen us, but tonight was exceptional.”