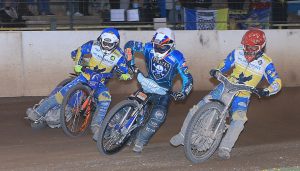 EASTBOURNE duo Richard Lawson and Lewis Kerr produced a sensational climax to the South Coast derby with a last-heat 5-1 to snatch victory over Poole.

The Eagles trailed throughout the Championship clash after conceding a 5-0 in Heat 1 – but Lawson and Kerr turned matters in the decider for a 45-44 victory.

That came at the expense of the previously unbeaten Steve Worrall, who top-scored for the Pirates with 13. Kerr led the way for the home side on 12+1.

Eastbourne co-promoter Trevor Geer said: “What a first meeting to come back to after 20 months away. It was unbelievable. To be down all meeting and come back like that was perfect for the supporters.

“Richard looked awful early on, but he came back towards the end of the meeting and was back to his old self.

“I thought it would be close, but not this close. I expected we would win more easily than we did.”

Poole co-promoter Danny Ford said: “It is always extra tough to lose when you have been in front all meeting, and we are all feeling the disappointment that we did not get the three points.

“But Eastbourne is a tough place to come to, and leaving with a point is in itself a massive achievement. So I just want to say well done to the lads. Not many would have had us down for that I guess, but losing at the final hurdle still hurts.”