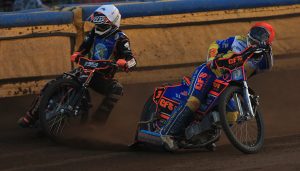 EDINBURGH stunned Eastbourne by pulling off their first-ever win at Arlington in the Championship on Saturday.

The Monarchs triumphed 46-44 having raced into an early lead and then held off the Eagles – with the home side frustrated by Kyle Newman’s mechanical failure on the third lap of Heat 15.

Sam Masters (13) and Josh Pickering (12+1) led the way for the visitors with Richard Lawson piling up 16 for the Eagles and Newman adding 10+2.

Edinburgh boss John Campbell said: “Of course we got lucky at the end when Newman packed up, but we deserved to win for sure – Richie (Worrall) had an engine failure before Heat 13 and that put him right off as well.

“Everything was positive about the whole show apart from Sam lifting going down the back straight in Heat 15 after making the gate!

Eastbourne manager Trevor Geer said: “I was so disappointed for the team but more so for Kyle. He put his heart and soul into that race, and he was so up for it.

“He had been riding well all night and he had a brilliant line in that race. He was cruelly robbed there.

“We were having to come from behind for the whole meeting. We should have pulled it off in that last heat as we did with Poole, but it was not to be.”