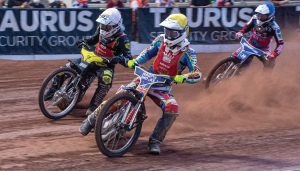 TEENAGERS Jake Mulford and Dan Gilkes both scored brilliant maximums to inspire Kent to a 50-39 NDL win at Belle Vue.

Gilkes completed a five-ride paid maximum (14+1) whilst Mulford swept to an incredible 19+2 from seven rides at reserve – with skipper Ryan Kinsley adding 12 as the visiting trio dominated. Jack Parkinson-Blackburn scored 10 for the Colts.

And Kent promoter Len Silver has confirmed Mulford’s form will be rewarded with additional opportunities for the club at senior level.

He said: “Chris (Hunt) and I are now convinced that we must give every possible opportunity for Jake to make his way into the Kings side.

“He scored a maximum at Manchester, winning races from the back as well as from the gate.

“I know you will approve our decision to give him at least three of the four rider-replacement rides against Eastbourne in the KO Cup on Tuesday. We both feel we have faith in Jake’s future.”